As our students graduate and commence another exciting chapter in their lives, TIS likes to hear what possibilities have opened up for them since leaving school. So we are delighted to have had the opportunity to talk with Daniel Yan and his Mum, Cindy, about his educational journey and where he is now!

When did you graduate from TIS?
Summer of 2018

Daniel, tell us a bit of your own experience with TIS?
I attended TIS from Grade 7 to 12. I have had many opportunities to find my own passions during my time at TIS, including music, math, and science.

What were the areas that impressed you most about TIS?
I was really appreciative of the school's support of my technological endeavours. For example, to support my friends and me in starting a prosthetics club, our Robotics teacher, Todd Voykin promoted our idea to the school board and helped us gain access to more 3D printers and an experience week trip planned solely for making prosthetic arms!

"I think that the education system was very effective. It helped Daniel develop a way of learning systematically."

Daniel's College journey, as told by Cindy Liu:
Daniel has just completed his undergraduate studies in the US as a Mechanical Engineer at the University of Michigan, Ann Arbor (2018-2022 May). After receiving a few top 20 universities' offers for a Ph.D., he decided to pursue a Ph.D. program in Mechanical Engineering at Johns Hopkins University with a full scholarship, starting in September 2022. He will be specializing in the intersection between mechanical engineering and biology, focusing on cell mechanics. 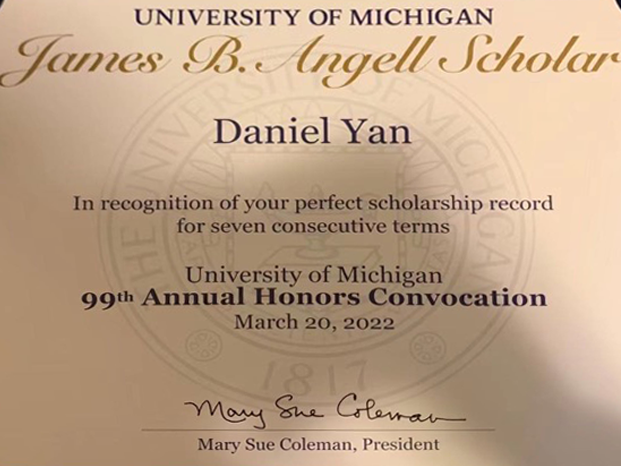 Why did you choose TIS for your children?
It wasn't solely my decision; it was a choice that Daniel and I made together. In fact, it was Daniel who made most of the decisions. When he was graduating from elementary, 4 middle schools accepted Daniel. I let Daniel choose on his own, but he had to give me a reason why he wanted to go there. The other schools were very well known too, yet he chose TIS. Although the reason may sound surprising, he said that TIS had a vast front field and sun-filled classrooms. I agreed with him immediately. Plus, since TIS used an education system from Alberta and we're from Canada, it was ideal for Daniel to study at TIS.

How do you believe TIS helped Daniel while he was here?
First, I think that the education system was very effective. It helped Daniel develop a way of learning systematically. Secondly, I'm thankful for TIS as they gave Daniel the freedom to think critically and grow at his own pace.

How has what Daniel learned at TIS helped him in his future endeavours?
TIS allowed Daniel to find his passions and turn them into his career. The teachers in TIS have given Daniel a tremendous amount of help, especially Mr.Voykin, who assisted Daniel with forming the E-Nable club. In addition, Mr. D'Entremont helped Daniel and recommended him to UBC; they allowed Daniel to work in the lab as a trainee.

TIS’ unique environment has created a network of alumni all bonded by their experience in Macau, TIS and Asia.